2017 kept us busy on multiple fronts, but few were as exciting as completely redesigning the Common Craft website. I’m writing to share three big additions to Common Craft we think you'll love.

1. Lesson Plans for Teaching with Videos

Our library of 95 videos is most often used in classrooms, training sessions and learning management systems. Instructors play a Common Craft video to set the stage for a discussion or lesson. We wanted to make this process easier, so we created Lesson Plans, like this one, to give you a head start in teaching with these videos. 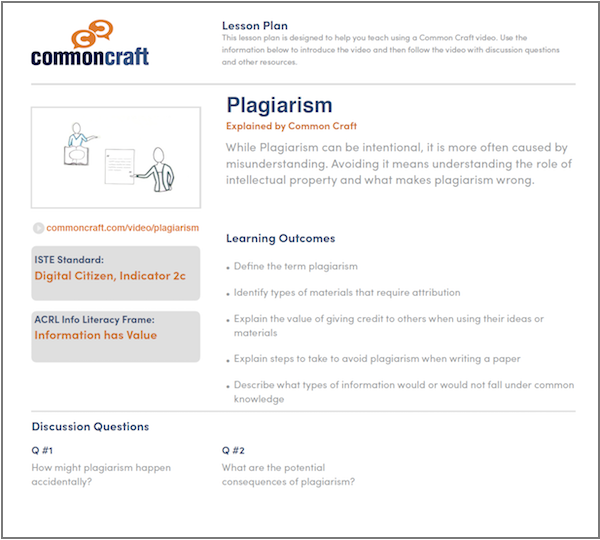 Common Craft members can now download Lesson Plans for most of our videos. Each Lesson Plan includes:

You can learn more about our lesson plans here, or download a sample Lesson Plan (PDF)

Thanks to member suggestions, our video library has evolved to include videos that focus on navigating intellectual property, research skills, digital literacy and more. We believe these are essential 21st century skills that require clear understanding. Below are a few popular titles from this new category:

More Cut-outs: Our library of downloadable visuals, called Cut-outs, is used in presentations, training materials, videos, websites and more. In 2017, the library grew considerably and we now have over 3,100 Cut-outs in the library.

Easier Access: We’ve also simplified our search tool and created a new directory page that breaks the library out by categories. Yay! 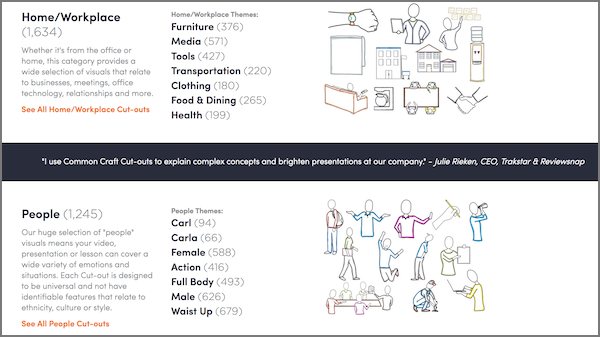 Learn more about using Cut-outs and our DIY Plan or download a one page Fact Sheet (PDF).

We hear a lot about design these days.  Apple products are probably the most popular examples.  The idea is that Apple became one of the most valuable companies in the world, in part, because they focus on the design of their products.
But what does that mean, really? What do organizations who focus on design do differently?
Recently the TV show 60 Minutes featured the design company IDEO, which was founded by David Kelley. At multiple points in the interview, Kelley mentions an idea that is at the core of design and design thinking.  The word is empathy.
The central tenet of design thinking, according to Kelley, isn't one of aesthetic or utility, but of empathy and human observation. "Be empathetic," Kelley explained to CBS' Charlie Rose. "Try to understand what people really value." Doing that, he says, will lay the foundation for more intuitive designs.
This got me thinking. When I talk about the most fundamental ideas that make explanations work, I use very similar language.  To make something easy to understand, you must empathize.  Put yourself in the audience’s shoes and try to understand how your communication sounds to them.  Only by empathizing can you create an explanation that works.
Could it be that explanation and design have a lot more in common? I think so, and here’s one way to look at it.
We are all designers. If you’ve ever made a paper airplane, taken a photo or built a fire, you’ve designed something. You had a goal and you made decisions about how to accomplish that goal using a specific medium. We are all designers.
Likewise, we are all explainers. Every day we communicate ideas with the goal to help people understand.  We explain why traffic was bad, why the CEO made a decision, why people sneeze more at springtime.  We are all explainers.
Now, being a designer or explainer does not necessarily mean we are good at it. The rubber hits the road, in both cases, when we learn about quality and what goes into a good design or explanation. The goal is not simply to have done it, but to have done it well. And that’s where we find the big difference between the two.
Design thinking has developed over many years. It is a profession and a focus of attention and care. People study it, practice it and refine it over a lifetime.  Some individuals have a talent for it and apply it to products we use every day. As a culture, we’re learning to appreciate good design and the designers who make it happen.
Unfortunately, this is not currently the case with explanation. While technical writers, teachers and journalists are often amazing explainers, we don't often think about these professions through the lens of explanation. We know they are great teachers, for example, but we don't necessarily point out explanation as a skill that makes them especially great. To me, this is like saying that an iPod is a useful gadget without recognizing that design is the element that makes it so useful.
My point is this: Communicators have an opportunity to think about the role of explanation like we think about the role of design. It's a skill that can be defined, developed, practiced and put to work in solving problems. Over time, we may see that a focus on explanation develops into something akin to design, where explainers emerge and inspire others to think differently about making ideas easy to understand.
It's possible that one key to explanation is applying design thinking to communication. By learning to empathize with our audience and understanding their needs, we can design communications that solve specific problems. The more this is the focus, the more we'll see that great explanations can become a new goal for professionals - something we can use to create change.
The next time you’re communicating something complex - remember - you’re a designer, too.
Here's the 60 Minutes segment about David Kelley and IDEO:

A few months ago, we released a completely new and different Common Craft. This is the story of the big ideas that drove the change and getting the website designed and built.

We've re-thought our website from the ground up and soon you'll see the all the changes we're making.  For now though, I want to highlight a few things that make a big difference.

1. A Focus on the Business. This may be the best way to explain how the focus has changed:

It's true - the new site is more closely aligned with the goal of finding, viewing, purchasing and downloading videos.

2. Simplified Video Organization. Our videos used to appear in two places, depending on their version: "free" or "presentation quality."  We've consolidated the display of videos one a single page. This means:

We're taking a big step to internationalize our videos.  For the first time, 10 of our videos (including the Social Media 9 Pack) will be available with voice-overs in 5 languages (English, French, German, [Brazilian] Portuguese and Spanish.)  These videos will be available for viewing, purchase and download.

Our video library will be organized into four major topics, which outline our direction in the future.  The topics are: Green, Money, Society and Technology. Our goal was to make the site look and feel like our videos.  We've integrated our artwork, used a white background and tried to make the experience as focused as our videos.

Of course there are many more changes, but I think these points capture some of the big ideas that drive the new design. More soon... Me (to the friendly TSA ID checker):  Do I have to remove my laptop computer?

TSA Employee: Yes, you do.

TSA Employee: Well, it's the most important thing to remove.

Me: But not important enough to be on the sign?

TSA: It's supposed to be on there, the people that printed it messed up (rolls eyes).

The TSA folks have hard jobs and I appreciate what they do. However, it doesn't exactly give me a safe feeling when the instructions for moving through the line efficiently are "messed up" and no on seems to care.

As you may have seen, the Common Craft Store has a section for merchandise that is looking pretty minimal at the moment.  At the same time, we often get requests for t-shirts.  Hopefully, we're about to solve this problem.

We've created a new "assignment" on a website called Pixish. Using Pixish, we can describe an image we need and have a community of creative people submit their ideas.  The creator of the winning images win "rewards" - often money, links, etc.

We're hoping to identify 2-3 images that we can put on t-shirts and other fun things that are offered in our store.  If you're creative and want to participate, please do.  The details are here.

We're offering $200US to the winners, plus some link-love from this blog.  The assignment ends on September 15th.

What would you like to see on a Common Craft t-shirt?