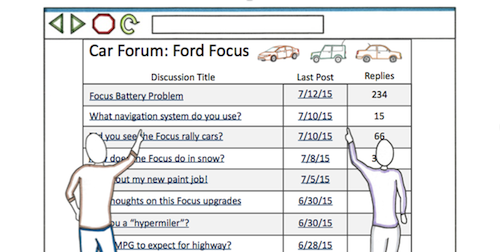 About this video: In the real world, we depend on discussions for learning and socializing. It’s how we relate to one another. The same thing happens on the Web, and thanks to discussion forums we have a reliable way to organize and discover information in the form of discussions among people anywhere in the world.

It teaches:
This video is part of our series on Social Media and is designed to help educators introduce common online tools.  If you're interested in using the Common Craft videos in your classroom, check out our membership options.
We'd like to thank Patrick O'Keefe for helping with this video. He is a friend and the author of Managing Online Forums. If you want to dive deeper into forums, I can't recommend his book enough.

As you may have seen, the Common Craft Store has a section for merchandise that is looking pretty minimal at the moment.  At the same time, we often get requests for t-shirts.  Hopefully, we're about to solve this problem.

We've created a new "assignment" on a website called Pixish. Using Pixish, we can describe an image we need and have a community of creative people submit their ideas.  The creator of the winning images win "rewards" - often money, links, etc.

We're hoping to identify 2-3 images that we can put on t-shirts and other fun things that are offered in our store.  If you're creative and want to participate, please do.  The details are here.

We're offering $200US to the winners, plus some link-love from this blog.  The assignment ends on September 15th.

What would you like to see on a Common Craft t-shirt?

I'll be speaking at what is shaping up to be a fun event at Zaaz in downtown Seattle on August 14th. I'll be presenting a version of the Online Community as Party talk.Â  The event is free and focused on folks in the local UX / usability / IA / design community.Â  To RSVP, pleae leave a comment here.Â

I'm looking forward to seeing my friend Paul Ingram from Ingram Labs and hearing more about "The Effective Use of Kittens" from Jason Carmel of Zaaz and "The Art of Deep Hanging Out" from Emma Rose. Good fun - thanks for putting all this together Ryan!

The Clue Unit podcast is a (mostly) weekly discussion of news and trends related to online communities in the business context with Jake McKee, Lee LeFever and Christopher Carfi.

This week we were joined by Derek Powazek, someone that we've talked about a number of times and took this chance to talk with him. We focused on Community As Business - Our current focus.

Derek Powazek
Design for Community
Publishing Before the Web - Newspaper
JPG Magazine - The Story
8020 Publishing
Access and Control Lead to Relationships
Gaming Can a Positive Impact - Embrace the Game
- 10 Photos per day
- Use Theme
- Encourage Friends to Vote (Digg, etc.)
Editors Make Final Call
Extremism and The Problem with Digg
Kuro5hin - Built Without an Editor
NewsAssignment
Tom Coates on Wikipedia
Wikipedia Required a Big Idea
Threadless and Creative vs. Financial Rewards
Threadless as Example for Doing Community Business
Lulu for Printing
Community Business Model
AssignmentZero for Pro/Am Journalism Wiki
"Community" - Using the Web For What It's Good At

A while back I posted an entry called Your Community is a Party Waiting to Happen that outlined a number of common sense ways that hosting a party is like managing an online community. I really believe the metaphor is useful and I've developed a talk on the subject.

Here are the slides from the talk...

If you haven't heard about Markus Frind and his dating site at plentyoffish.com, you will.

Markus is singlehandedly disrupting the dating site industry by offering a free alternative to pay-to-play sites like match.com. What makes his story so interesting is that he is the site's only employee - he runs the whole site from his Vancouver, Canada apartment and makes millions of dollars from Google ad revenue.

Here are some of the basic facts from a recent Wall Street Journal story (via: online personal watch):

There are two things that I love about this story:

1. Disruption: Markus is constantly talking about the demise of the paid sites and has the model to prove that he's a real threat to the top players. I have nothing against the paid sites, or their model, but it's great to see one guy be able to create something so threatening to an established industry. His blog is here.

2. Small is beautiful. Consider this: In 2005, Match.com had 275 employees and Alexa (whose permalinking and graph sharing tool is very broken - booo!) says Plenty of Fish is gaining on them in a big way - with only one employee and no venture funding.

This idea of being small, lightweight and happy really appeals to me in a fundamental way. It reminds me of the Robot Co-op who run very large sites (like 43 Things) with a small team of 6. The same is true with 37 Signals who have chosen to stay small despite the to opportunity to grow in #s of employees and of course, Craigslist.

These days, 20+ employees and millions of capital can be more of an impediment than an advantage - especially if you count the happiness factor. I count Markus as one the few who are showing us the business models of the future.