Late last year I was invited to present at an event called Big Ideas Fest, which focuses on change and inspiration related to K-20 education.  My presentation, entitled "Viral to Valuable" was about 15 minutes long and appeared during a track of the conference called "Scale and Spread", which related to scaling and spreading an idea.  If you're interested in the Common Craft story and how we came to focus our business on video as a digital product, etc., I tell the story in this video:

To find more videos of presenters from the event, check out the Big Ideas Fest YouTube channel. To learn even more about the Common Craft story, see our About page. 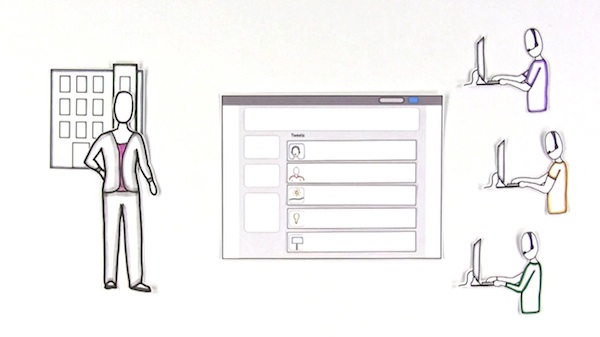 Twitter has been a big part of the Common Craft story.  In 2008 we made a video called Twitter in Plain English that was present on the Twitter home page for over a year, introducing millions to both Twitter and Common Craft. Since that time Twitter has evolved in many ways.  As it became a powerful way to track news and discover information, we made a video on Twitter Search.  Now that it’s become a powerful business tool, we’re publishing a new video called Twitter for Business, which explains how businesses are putting Twitter to work.   Together, these make a nice pack of Twitter videos for use in training and education.
Of course, you can follow our business on Twitter @commoncraft.
As you may have seen, we recently published a video about copyright and Creative Commons.  It tells the story of a photographer who discovers ways to use both for her goals. Recently, the Creative Commons organization saw the video and asked an important question in a tweet:

Nice video on how a photographer might use #CC licenses: http://t.co/rfmG5GEf (in draft) @CommonCraft Will you CC license this video? :)

Our answer is “no” - and here’s why:
We think Creative Commons is an excellent idea. Unlike reserving all rights with copyright, it gives creators a way to make their work more sharable.  Like we portrayed in our video, it makes permission implicit and that’s a great way for creators to get their work in front of more people.
At the same time, the potential of Creative Commons licensing must be viewed in terms of a person or organization’s goals.  Using it responsibly creates opportunities to build awareness, brand recognition and fan base - all things that can contribute to earning a living over the long term. You could say it’s a means to an end for many people and organizations.
At Common Craft we’ve been making videos since 2007.  In the early days we did use Creative Commons and YouTube for making a few of our videos free for sharing.  This helped us build a great fan base and brand awareness.  But over time our priorities needed to change. To keep making useful videos for educators, we needed a way to offer them for a licensing fee, which meant Creative Commons made less sense.
But that’s not the only consideration.
You might say, “Why not use Creative Commons for this one video?” It seems reasonable, given the subject matter, that we might want to provide an example and make the video sharable.
This works against our goals in another way. A big obstacle for our business is the perception, from our early work, that all Common Craft videos are free for sharing. To have a successful business, we needed to change this perception and put the focus on our subscription service, which makes our videos sharable for our members. Because our members are paying for video licensing and sharing tools we provide, licensing even a single with Creative Commons would cause two problems:
1.  Create more confusion about our business
2.  Lessen the value of our subscription service for members
So, we love the idea of Creative Commons, and we know it can be valuable for many - especially those with a priority on building awareness. But for our business and goals it doesn't fit.
Recently comedian Louis C.K. has made a lot of news by offering his most recent comedy special for $5 via his website. That doesn’t sound amazingly disruptive in itself, but if you dive a little deeper, you’ll see that it's an experiment that shines a light on the future of media.
Let’s look at the normal process.  A creative person creates something amazing; it could be a video, a album, artwork, whatever.  They often work, under contract, with media companies to sell it. This gives them access to PR, marketing, distribution and management - all helpful for a new artist.  The revenue from selling the creative work pays for the people doing the PR, marketing, distribution and management.  At the end of the day, the artist often gives up some rights to their work, get a lot of people with needs and (small) fraction of every dollar earned. It’s a heavy, cumbersome model that has been the standard for many years.
Louis C.K. has taken a first step in disrupting this model and is in a unique position for doing so.  He is a very talented individual with a lot of fans.  He’s known for his standup comedy, but he also has a successful TV show called Louie. But he’s more than the star of the show. He writes, directs, edits, produces and stars in the show.  More than any show on TV, “Louie” is a product of one person.
With his new standup special, he’s using these production talents.  He paid for the production from his own pocket at a cost of over $170,000.  He edited the special himself. He owns the entire process and now he’s selling his production on his website for $5 dollars.  He’s making a bet, with his own cash, that he can do it better than media companies.
Here’s a quote from a recent post from him:

The show went on sale at noon on Saturday, December 10th. 12 hours later, we had over 50,000 purchases and had earned $250,000, breaking even on the cost of production and website. As of Today [the 13th], we've sold over 110,000 copies for a total of over $500,000. Minus some money for PayPal charges etc, I have a profit around $200,000 (after taxes $75.58). This is less than I would have been paid by a large company to simply perform the show and let them sell it to you, but they would have charged you about $20 for the video. They would have given you an encrypted and regionally restricted video of limited value, and they would have owned your private information for their own use. They would have withheld international availability indefinitely. This way, you only paid $5, you can use the video any way you want, and you can watch it in Dublin, whatever the city is in Belgium, or Dubai. I got paid nice, and I still own the video (as do you).

Why is this disruptive?  Because he completely cut out the typical media companies and their controls. Using his own talents and his website, he can make something awesome, sell it directly to fans and earn a good living. No marketers, no agents, no distribution deals, no censors, No DRM, and many fewer hassles.  Just one talented guy and a website.
This is just one more example of what’s possible. If it works for him, couldn’t it work for many, many others?
As I said before, he is uniquely positioned to do it. The biggest barrier to making the direct-to-fans model work, for most of us, is brand.  Earning a living from it requires having enough fans who are willing to participate - and that’s the hard part. He's spent years of hard work getting to this point.
We’ve seen the potential at Common Craft in licensing our videos directly to educators.  While third party tools help to make it happen, we are a two person company and like Louis C.K., we own the entire process.  Every video we make is written, produced, edited and distributed by the two of us via commoncraft.com.  We’ve made a conscious effort to stay as independent as possible and it has made all the difference. We can use our time to make videos for our members, stay in control and finance our future work.
In that spirit, a final quote from Louis (emphasis mine):

I really hope people keep buying it a lot, so I can have shitloads of money, but at this point I think we can safely say that the experiment really worked. If anybody stole it, it wasn't many of you. Pretty much everybody bought it. And so now we all get to know that about people and stuff.

And that pretty much sums up the why this is news. He now has evidence that people will buy stuff and if that's true for others, it means people are starting to think differently about how they support the work they love - and that's a good thing.

It's true!  We just launched our new website and business. Here’s a quick review: 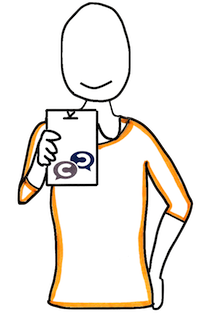 Common Craft is now a video subscription service. You or your organization can become a Common Craft member and have your own online library of all current and future Common Craft videos for use in classrooms and on the web.

We’re focusing on teachers, trainers, bloggers and businesses who need better ways to educate others.  Our members will be a big part of how we decide what titles to make in the future.
We'd love your help in spreading word.
We’ve set up a Sharing Center that provides:
We're @commoncraft on Twitter and using the #NewCC hashtag.
Thanks so much for your interest in Common Craft.  Please let us know if you have any thoughts or feedback.  Cheers!