The Woot! service (known for their one-day, one-deal offers) has always been know for their light-hearted and fun communication style. It's a quality I love to see in companies.  Any company that's prepared to be a little silly and not take itself too seriously has an opportunity to find loads of adoring customers and fans on the web. In the context of boring corporate announcements, these companies seem like the life of the party.

Thanks to their business model and adoring fans, Woot! was recently acquired by Amazon. So what do they do in the face of being acquired by a huge corporation?  They make their announcement in the form of a rapping monkey.  I love it.  It tells the story, it's clever and fun and it feels like something Woot! should do.

If that's not enough for you, check out the hilarious email from their CEO.

I've been really excited to see the feedback about the new Web License. Asking people to pay to embed a video has raised questions and responding to them has been an interesting experience. If nothing else, it's eye-opening to see what people are assuming about our business.

For example, Mike Masnick at Techdirt wrote an article called "Viral Video Producers Want To Charge You to Embed Their Videos."  Then, Steven Hodson at Inquisitor follow up the Techdirt article with "Common Craft Seems to Forget What Makes Viral Video... Well Viral."

Both these articles assume (mostly incorrectly) a few things:

1. Viral video is our business/marketing model
2. YouTube is required to build a business on video
3. Our Web License is focused on viral distribution

It's really interesting to me that, after 3 years of making nearly 30 of our own videos, people still think we're a viral video company. We haven't had a viral hit in a very long time, or thought we could build a business on viral videos. In fact, I'm not sure successful businesses can be sustained that way. I assumed, perhaps optimistically, that a visit to our web site would make that clear.

Now I'm wondering if what has appeared on a few blogs is a widely held perception? Are we not explaining our own business well enough?

The truth is, we make high quality educational videos - videos that help organizations and individuals accomplish goals.  These are videos (unlike most viral videos) that people are happy to pay to license because they are useful. The best we can do is make a quality product and attract people and organizations that want to buy it. Part of this strategy is making commoncraft.com the home of our videos - not a host like YouTube.

The Web License model is something that (as far as we know) has never been offered before. In the context of purely viral videos, it would be a very difficult model.  But the value of our videos is not so much in blog posts or viral distribution, it's in solving problems for people and organizations whose job is to inform and educate others, on and off the web. That's where you'll find us in the future.

Daniel Sevitt of EyeView wrote a great article on ReelSEO.com called "The Three Types of Online Video for Business." The article deserves a full read, but I was struck by this simple diagram that illustrates the types of videos and their expected outcomes. 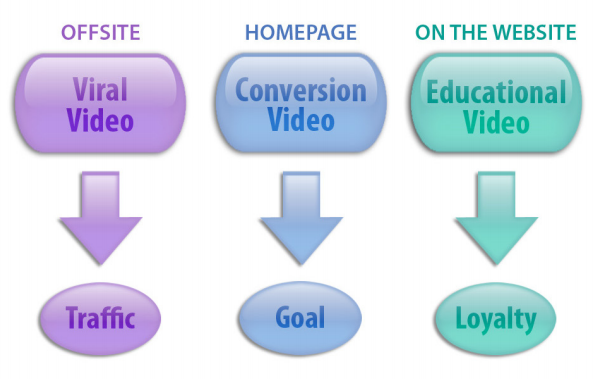 This almost seems unreal - maybe it is.  Dan, a Stanford student,  has a chance to make a guest post on TechCrunch about his viral video company.  What does he do?  He proceeds to make it stunningly clear how misguided and irresponsible his "viral video" tactics are.  It reads like a manual for new media douchebaggery.

Blogs: We reach out to individuals who run relevant blogs and actually pay them to post our embedded videos. Sounds a little bit like cheating/PayPerPost, but itâ€™s effective and itâ€™s not against any rules.
Forums: We start new threads and embed our videos. Sometimes, this means kickstarting the conversations by setting up multiple accounts on each forum and posting back and forth between a few different users.
MySpace: Plenty of users allow you to embed YouTube videos right in the comments section of their MySpace pages. We take advantage of this.
Commenting - Having a Conversation with Yourself:  A great way to maximize the number of people who watch our videos is to create some sort of controversy in the comments section below the video. We get a few people in our office to log in throughout the day and post heated comments back and forth (you can definitely have a lot of fun with this).
Dan finishes with this bit of perspective and advice...

You simply canâ€™t expect to post great videos on YouTube and have them go viral on their own, even if you think you have the best videos ever. These days, achieving true virality takes serious creativity, some luck, and a lot of hard work. So, my advice: fire your PR firm and do it yourself.
I think I speak for you when I say O_M_G. Dan has the nerve to call his advice ways to acheive "true virality".  Doesn't he know that what he's doing is blatantly artificial? I'm floored.

Update:  Dan posts again TechCrunch. This time he's saying that he doesn't use all those techniques, he was just saying that that some do. I don't buy it, though I do know Dan has big regrets about his original post. I'm not sure why, but his words and those that support him eat at me in a fundamental way. I've wasted too much time on it already, but I may have to write more just to get it out.