Once there was a cartoon experiment. This experiment used the most common 1,000 words in English to describe a Saturn V rocket.  Have you wondered about getting started on describing something huge or complex in friendly language? For me, this cartoonist-inspired gizmo Up Goer Text Editor is a way to flex some muscles and warm up by challenging myself to describe using only common words.

As you use the device, it strips away jargon and demands extremely lean but frequently comical descriptions. As I explain in the video below, there is no word for a cloud in Up Goer. You can call it a water-holder or a sky-thing.

Partly because the cartoonist of xkcd, Randall Munroe, is so popular with college and graduate students, the Up Goer idea charmed some graduate students at the University of Washington. They staged a competition – each contestant had to describe their own research using Up Goer and I interviewed the winner, Yasmeen Hussain.

She described her frustration and then her breakthrough in trying to simplify her study of molecular signaling between cells into Up Goer. Her results are on the video.

“I study tiny things that are man and woman parts...the woman part talks and the man part listens,” she wrote. Of course that line got a huge laugh from the audience at Town Hall earlier this year.

As a professional writer who struggles to explain genomics and cancer and sometimes economics to broad audiences, I value the way Up Goer focuses one to a different level for the explanation. I don’t recommend leaving your writing at the Up Goer level, but the exercise of starting there can be valuable.

What Hussain learned as she tried to explain cell signaling known as chemotaxis is that she could drastically reduce the language. She wound up calling cell signaling “talk.”  Do the cells talk? No. Do they communicate? Well, yes.

As you add back in the jargon, you’ll know you are gradually taking your explanation further and further from the common words. I also believe that sometimes, in forcing yourself to the most primitive descriptions, you may have insights about the message itself. Maybe the most important points are not so tied to the most technical details but something simpler and more universal that can be stated in common words.

I’m sure those who write for radio and television probably do some of this already. For me, who spends more time with text, the Up Goer restrictions seemed to free up seeing the message in a different way.

For more discovery, you can visit a website just about science-in-Up-Goer or watch a video made using Up-Goer about planetary research. There is a majesty to the description of the solar system with a child’s voice using simple language to explain something so vast.

If you do write something you love in Up Goer, please join the community and post it on Twitter with the hashtag #upgoerfive so we can all enjoy it.

Sally James blogs about science and communication at www.seattlesciencewriter.com. 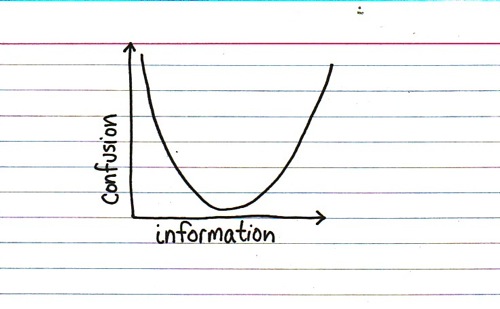 The results were crystal clear. People who received Arial instructions were more enthusiastic about the exercise routine than the Brush font folks, and predicted it would be much easier. The psychologists tried the experiment again using a sushi roll recipe and saw similar results.

We've had a number of discussions about our paperworks format and how it's perceived by viewers.  When talking to people, they often mention accessibility - that the format gives them a feeling like "Oh, I can get this, it's not going over my head." Could it be that one reason people like our videos is that their perception of difficulty, based on the simple drawings, makes them more likely to keep watching and act on the ideas?

Nancy White pointed us to this awesome video.  From what I gather, it's a music video for the band Field Music.  Impressive. Maybe one day I'll have such mad skillz with the sharpie. This is called the Q-drum and it's built for transporting 20 gallons of water - something that millions do everyday. Super simple indeed.

You can read more in the New York Times article Design that Solves Problems for the Worlds Poor. I first heard about the Q-drum from Darren Barefoot. This is a Japanese toilet that has 17 buttons. The one I use at home only has a single lever and it's never left me wanting more. Needlessly complex? I say yes.

Maybe you've seen similar items? I'd love to hear about any products that are stark examples of simplicity or complexity.

My friend Johnny Klein pointed me to an fun and funny explanation of how traffic works, (or not) in Beijing, China. It's by Henry B and presented in multiple photos of drawings on paper, which work really well to get the point across.

Here's one of the simple-but-effective diagrams, followed by the caption. To make a left turn, it is VITAL that [A] cut off all eastbound traffic as soon as possible. The first few brave or foolish legitimate pedestrians step off the curb; this is of no concern. [A] makes his move.

Henry recently posted another one on overpasses that you have to read to believe.