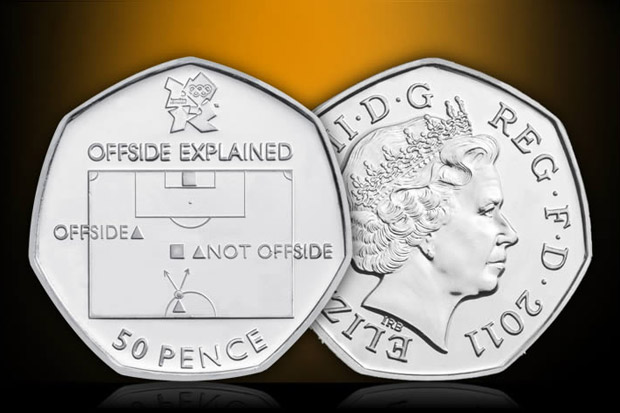 I grew up playing soccer and over the past few years, Sachi and I have become bigger fans than ever, especially for our hometown Seattle Sounders.  The rules of soccer came pretty easily to Sachi who didn't play as a youngster - with one huge exception: the offsides rule.  I tried to point it out at matches, explain the idea, etc.  Eventually, visuals did the trick and now she's the one throwing her arms in the air.

Indeed, the offsides rule has a serious, worldwide explanation problem. It's adoption is limited by how the idea is being explained.  And looking forward to The 2012 Olympics in London, this is an explanation problem that's ripe for a solution.

Enter Neil Wolfson, who won a competition to design a coin which was sport related for a series to celebrate the Olympics. According to Wolfson:

So, the coin is a visual aid meant to be used in concert with a verbal explanation.  Sounds familiar.  The real magic of this explanation though, is that it also buys beer.