Blog Posts About: curse of knowledge

When I'm asked about the causes of unclear or confusing communication, I always highlight the curse of knowledge. I believe it is one of the most impactful ideas for communicators to understand. Why? Because we all have the curse and it influences our explanations.

The big idea: The more we know about a subject, the harder it is for us to explain it to a beginner. Our knowledge curses us and interferes with our ability to make accurate assumptions about our audience. We find it difficult to imagine what it's like not to know. 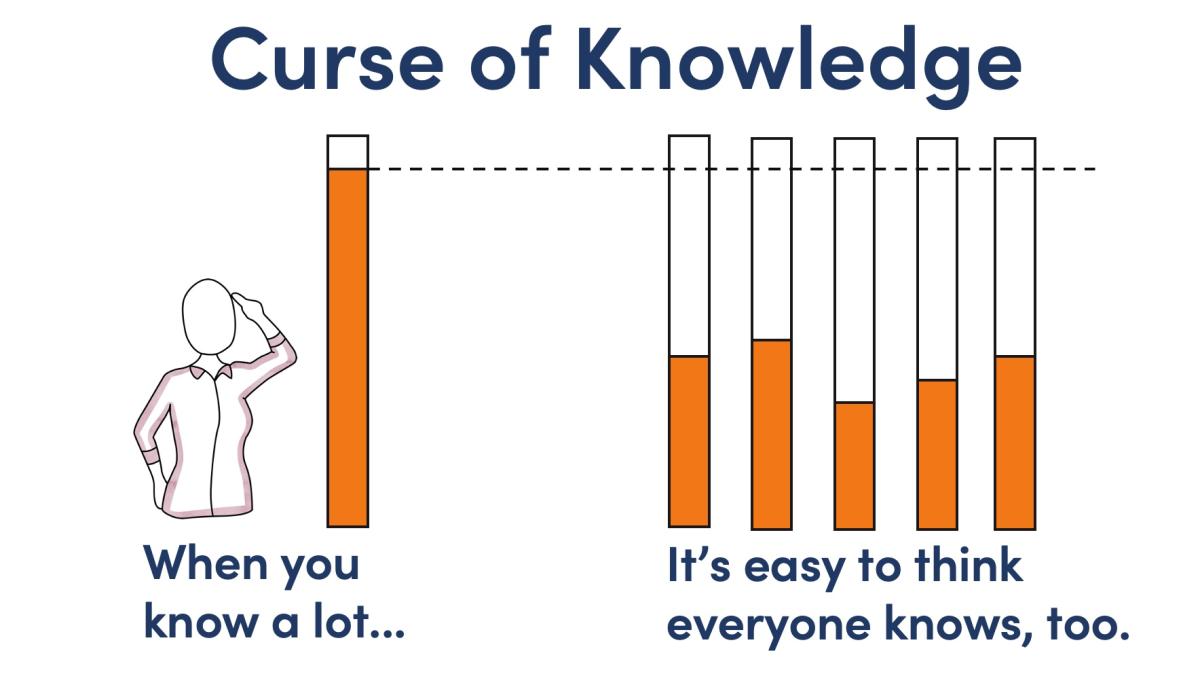 For example, think about a lawyer who spent her career reading and writing legal documents and talking with fellow lawyers all day, every day. When someone new to law asks this lawyer about tort reform, they're likely to get an explanation that seems confusing. This lawyer has the curse; they know too much to answer the question in a language understood by a layperson.

We're all guilty of having the curse. We all have something in our life that we know very well - perhaps too well to explain easily. The key is to know that the curse exists and to be prepared.

Video: Understanding the Curse of Knowledge

The video below from the Explainer Academy was recently published on YouTube. It explains the curse of knowledge using a study by Elizabeth Newton. Feel free to share.

What You Can Do to Defeat the Curse

Consider every word. Sometimes a word that is completely natural to you can doom an explanation. For example, let's say you're a financial planner in a meeting with a young couple, and you mention "amortization". It sounds perfectly natural and clear to you. Your peers use the word all the time. But the couple's eyes glaze over. They nod, but don't really understand. You have the curse and it's preventing you from being clear and understandable.

Empathize. When you're preparing to explain something new, take a step back and think about your audience as individuals. Imagine being in their shoes and hearing your words for the first time. Then, go back to your materials with the audience in mind. what might confuse them? Can you present the idea more clearly?

Connect. Is it possible for you to have a quick conversation with someone in the target audience? If so, ask about specific words and examples you'd like to use. Are there alternatives that will sound more familiar?

Set expectations. If we simplify too much, it may sound condescending and that can kill the vibe. When you need to explain an idea for a group, provide a quick preface. Something like, "This subject is complicated and I'm going to explain it. I'll start with basics that many of you already understand. This will help ensure that we keep everyone on the same page."

Learn more about explanation skills in my book The Art of Explanation.

Our Explanation Master Course at the Explainer Academy is a media-rich guide to developing your communication skills.

When I talk about explanation skills, I often hear a common response: “Boy do I know someone who needs that!” Over time I’ve found that, often, this person in need is a scientist or research professor who can’t seem to explain their work or current projects in an understandable way.
It’s a fascinating paradox. You could reason that the most informed people would have the best explanations, but it’s not often the case. Many times, the inverse is true.  As I first learned in the book Made to Stick, knowledge has a way of “cursing” us and making it difficult for us to imagine what it’s like not to know something. When it comes time to explain it, we can’t put ourselves in another’s shoes. This is the Curse of Knowledge.
But it goes deeper. Austin Kleon pointed me to an article by Greg Elbow called “Maybe Academics Aren’t So Stupid After All”, which provides a smart look at why academics struggle with being understandable, especially in speech.  Elbow, author of Vernacular Eloquence, deems the condition “sentence interruptus”. He writes:
No, the chaos that bedevils the speech of so many academics takes the form of frequent interruptions in the flow of speech — interruptions that come from imperious intrusions into our minds of other thoughts. Before one sentence is finished, we break in with “well but, that isn’t quite it, it’s really a matter of…”. Academics often can’t finish one sentence or thought before launching into a related one.
I’m sure you’ve seen this in action. Elbow relates it to how he was taught in graduate school:
When we academics were in graduate school, we were trained to write badly (no one put it this way of course) because every time we wrote X, our teacher always commented, “But have you considered Y? Don’t you see that Y completely contradicts what you write here.” “Have you considered” is the favorite knee-jerk response of academics to any idea. As a result, we learn as students to clog up our writing with added clauses and phrases to keep them from being attacked. In a sense (a scary sense), our syntactic goal is create sentences that take a form something like this:
X, and yet on the other hand Y, yet nevertheless X in certain respects, while at the same time Y in other respects.
In some ways, the same critical thinking and awareness of criticism that helps academics earn respect among their peers and have fruitful careers inhibits how they present ideas to people outside their profession. It becomes a habit that’s hard to break. Elbow continues...
We are trained as academics to look for exceptions, never to accept one idea or point of view or formulation without looking for contradictions or counter examples or opposing ideas. Yet this habit gets so internalized that we often don’t quite realize we are doing it; we just “talk normally” — but this normal is fractured discourse to listeners.
By discussing the exceptions, the alternative views, the conflicting research, one can present a more accurate and defensible position. This style of communication is valuable and needed, especially in academia where defense of an idea can be paramount.
However, there is a difference between being accurate and understandable. When understanding is the goal, we sometimes have to trade a bit of accuracy for understanding and realize that without a foundation of basic understanding, the details don’t matter for most people.  That’s why we need better explanations.  Part of Elbow's point is that writing is way to solve the speaking problem and I agree. Writing an explanation forces you to think differently about it and start to see how it could be improved in speech or whatever media you choose. A few weeks back I had coffee with Kalid Azad, who runs Better Explained, a blog and book that focuses on the use of intuition to understand “gnarly” subjects like math and programming. His tagline is “Learn right, not rote”. I love that.
Kalid made a point that day that stuck with me. Here it is from a blog post called “Developing Your Intuition for Math”.

Our initial exposure to an idea shapes our intuition. And our intuition impacts how much we enjoy a subject. What do I mean?
Suppose we want to define a “cat”:
The modern definition is precise, sure. But is it the best? Is it what you’d teach a child learning the word? Does it give better insight into the “catness” of the animal? Not really. The modern definition is useful, but after getting an understanding of what a cat is. It shouldn’t be our starting point.
Unfortunately, math understanding seems to follow the DNA pattern. We’re taught the modern, rigorous definition and not the insights that led up to it. We’re left with arcane formulas (DNA) but little understanding of what the idea is.

Precisely.  I’ve felt this often in math classes. I needed to understand the context and big ideas first, the reasoning. Only then could I make sense of the formulas.  For explanations to work, we sometimes have to trade technical accuracy for understanding as a first priority and I think that is the essence of Kalid’s cat example.
We know so much about a subject that we forget what makes it understandable to others. The precision and accuracy that we value becomes a liability, making it difficult to relate the big, fundamental ideas that make explanations work from the start. This is the Curse of Knowledge at work.
When you need to explain an idea, think about Kalid’s cat. Look at your explanation and ask: Am I focused on mammalian DNA or the furry beasts with claws and teeth?  I think you’ll find that, depending on the audience, the teeth are a good place to start because they build the understanding helps everything else make sense.
Read Kalid’s entire post here.