We're approaching the 4 year mark in our video business.  On April 27th, we'll celebrate the anniversary of posting "RSS in Plain English" on YouTube and our website.  Since that time a lot has happened, but I think it's interesting that the RSS video, which we did on a whim, established much of the style for which we are known around the world.

It's these anniversaries that prompt me to step back and take a look at the data and wonder how it all happened. In a nutshell, we're into the 10’s of millions of views now.

Let’s take a look at where our videos are right now:

YouTube: We shared our early videos (less than half the library) on YouTube and many of them are still there and referring people to our website.

dotSUB: We used dotSUB.com for some of the early videos because they crowdsource subtitles.  dotSUB was the host of Twitter in Plain English, which Twitter chose to link from their front page for over a year. And a bonus - subtitles in over 87 languages!

Our Website: In choosing not to use video sharing services, our goal became to make commoncraft.com the home of our videos.

Custom Work:  We’ve also been fortunate to work with some well-known companies that have helped introduce us to the world as well. These videos are on YouTube and hosted on customer websites.

Other: We've licensed our work to people and businesses around the world for the past three years, but it's hard to track these views.

Here’s how all this breaks down: 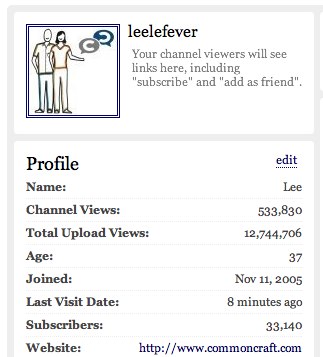 About 50k people click “play” on videos on our website per month, which equals about 1 million views over two years.

Across three Google videos there are about 7 million views, the biggest of which is “Google Docs in Plain English” (3.9m), followed by Google Reader (1.3m) and My Location (1.7m). 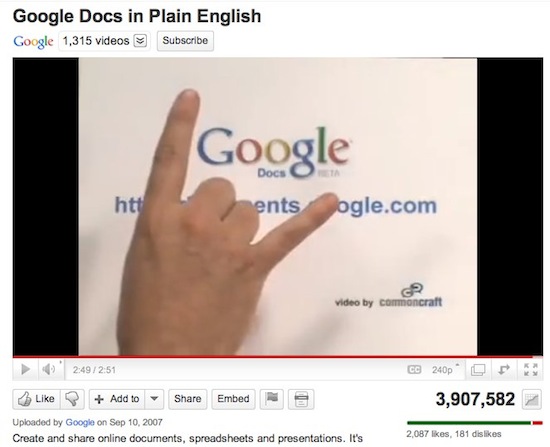 Then we have the video we made with Dropbox, which is currently on their front page and in their app. Recently we estimated it had about 7 million views.

That's over 35 million views - and we're not counting all our custom work or videos we've licensed to others.

If someone would have told me that the RSS video would lead to this, I would have laughed myself silly.  But here we are. In fact, we continue to feel that we're just getting started. At the end of the day, it's not about views for us, especially since we’ve chosen not to use the videos to sell ads. These views are seeds that build awareness of our brand and abilities.  We have big plans for Common Craft that wouldn’t be possible without a high degree of visibility - and that’s how the views help the most.

The future goal isn’t millions of views, it’s millions of happy customers who use our videos to delight others. Here’s to the next million of those!