The new HBO show Newsroom, written by Aaron Sorkin, follows the lives of a team of TV journalists at a fictional news station called ACN. Instead of making up a constant stream of news for the show, Sorkin opted to set the show in the recent past and cover real-life events like the Gulf Oil Spill and the rise of the Tea Party.  Some speculate that the show represents Sorkin’s vision of how the stories should have been covered in the news.

Hindsight is always 20/20 and I do not wish to dwell on his choices in covering specific news stories. However, I see a theme emerging that I find interesting.  It’s the role of explanation and an explanation specialist.
In the second episode we meet Senior Financial Reporter Sloan Sabbith, played by Olivia Munn. Smart, ambitious and attractive, Sabbith is obviously going places. I believe this character is becoming the show’s explanation specialist, someone who is focused on making complex ideas easy to understand. 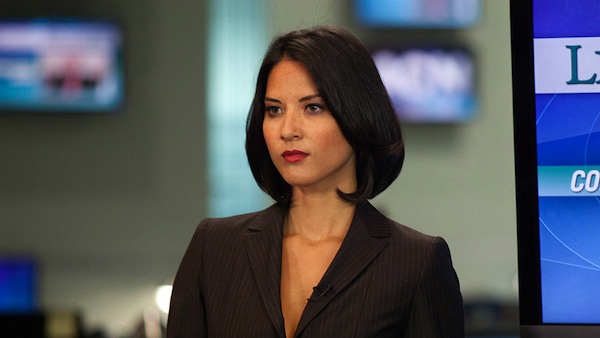 In this episode and repeated in the “previously on” scenes, we see Executive Producer Mackenzie Machale (Emily Mortimer) tell Sabbith:

I want to give you 5 minutes every night to talk about where we are and how we got here.

Then, in episode 6 “Bullies”, we learn that Machale, a seasoned war journalist, has limited knowledge of economics.  Sabbith meets with her on multiple occasions to explain big events that are affecting the economic world.  In one scene, the subject becomes the difference between commercial and investment banks and how their relationship has changed.  Sabbith explains:

The culture of deregulation culminates in 1999 (Glass-Steagall gets repealed) and immediately banks start merging. Gordon Gecko can use George Bailey's bank balance to make bets.

This is an explanation specialist at work.  She’s building context and making connections.  She’s speaking in a language that her audience can understand. Gordon Gecko and George Bailey.  I love it.
So here’s my prediction.  In Aaron Sorkin’s apparent effort to portray news as it should have been covered, we’ll see Sloan Sabbith emerge as an explanation specialist.  She will have 5 minutes of every broadcast to explain the major events and become a resource for her team who also need these skills.
This is not a new idea in the world of news. My friend and journalism professor at NYU, Jay Rosen (@jayrosen_nyu) has long been an advocate for more and better explainers in the news.  Perhaps we’ll see more of Sorkin’s version of this idea in the future.